April and May Ministry Update 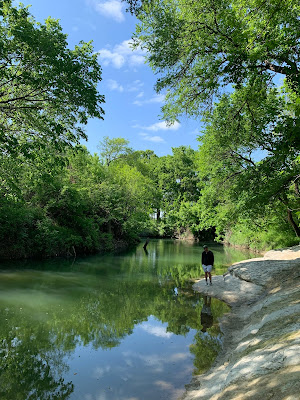 I hope you’re doing well! Things have been really busy around here as we wrapped up the school year and got prepared for the summer. My schedule is finally slowing down now so I wanted to give you a combined April and May update. 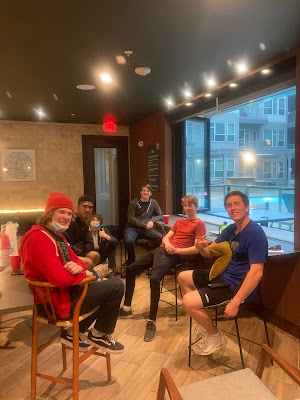 This picture is from one of our last core meetings this year. I love these guys and I’m excited that they are becoming such good friends and growing so much. Also, here’s a fun fact: it down-poured and flooded this room right after we took this picture so we had to scram out of there. 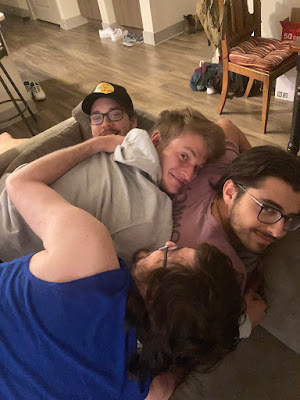 Three of my roommates: Paul (in blue), Adam (in maroon), and Casey (in gray) decided to dog-pile on Max, while I took a picture. I’m so thankful I got to live with these guys! They are such a fun group and have been good friends to me this year. This was taken just a week before Adam got married and moved out to live with his new wife, so he no longer lives with us, but the rest of us will be staying in the same apartment for this next year. 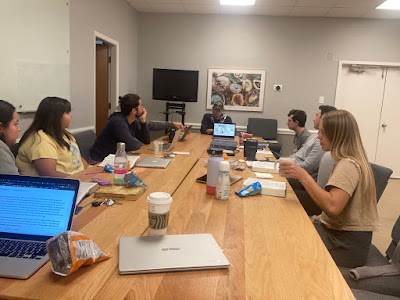 This picture comes from one of our last classes of the year where we studied eschatology together (study of the end times). We read the book of Revelation and a lot of theological literature, of course, but we also studied how life after death is depicted in popular media to see how that has influenced what people tend to believe about such a tricky topic. This class gave me a lot more questions than it did answers, but it was really helpful in beginning to work through some of these important questions that even a lot of Christians disagree about. 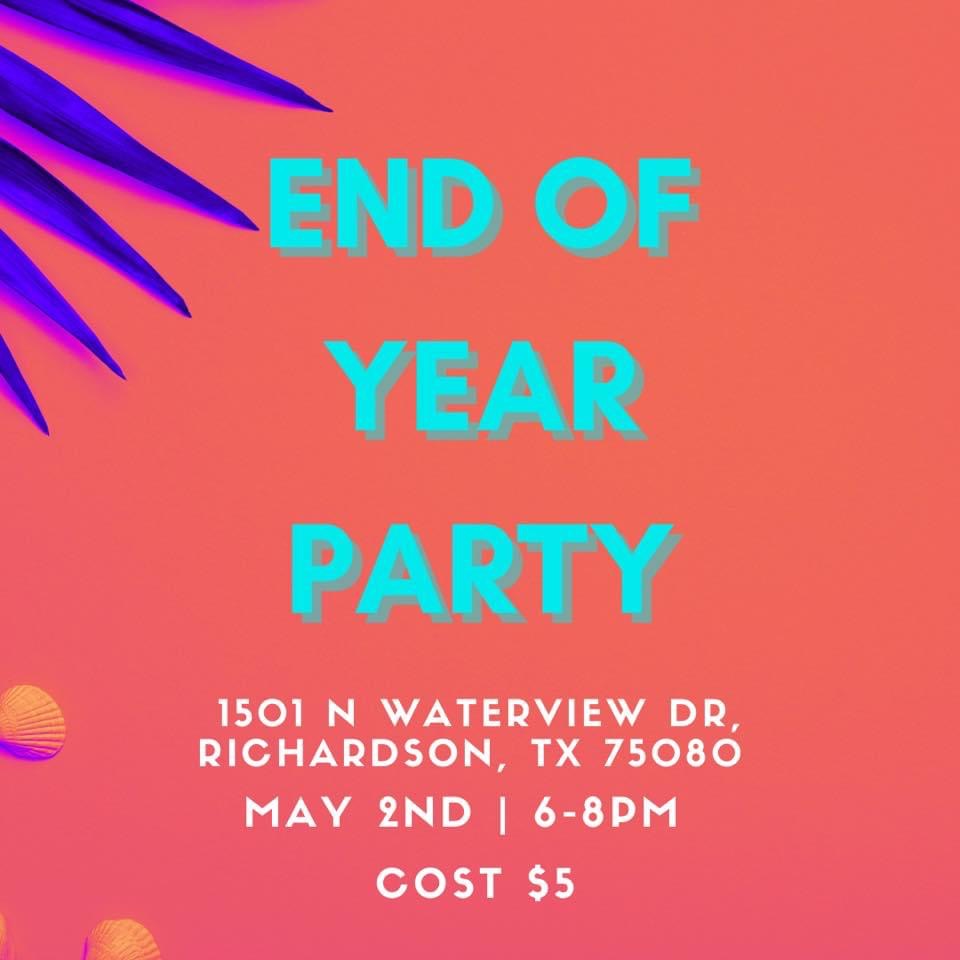 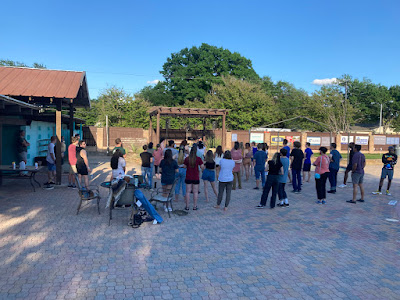 This is our Collin Focus community worshipping together at our end of the year party. Normally we would dress up a bit and have a nice banquet room, but because of Covid regulations we decided to just grill out and have a pool party! God has been so good to our community this year. The fact that we had so many students would come out and celebrate and worship God right before their final exams, in probably the hardest year to do ministry in a long time, is really a testament to how much God has been working. Praise Him for that! 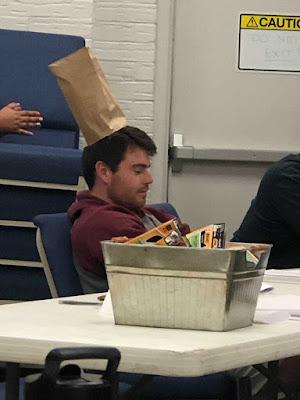 This was taken at a two-day training course called pioneering bootcamp. It’s hosted by another college ministry called Chi-Alpha which has started ministries all across the country on college campuses and it’s called pioneering bootcamp because it’s about how to effectively start new ministries on campuses that don’t have existing ministries yet. I know this picture looks like I’m not paying any attention, but I promise I was - this was taken during a break and I don’t even remember closing my eyes or why there is a bag on my head. I’m still trying to get to the bottom of this. 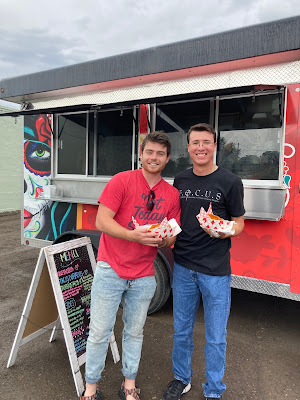 This is me and friend Spencer getting some tacos together after church. It might not seem like it, but this was a huge moment out of the last two months because these were probably some of the best tacos I’ve ever had (from a food truck that’s in downtown Wylie every Sunday). I highly recommend my friend Spencer and these tacos.

Thank you for reading and since we’re at the end of the year, here’s some really special news:

I’ll be staying on Focus staff this next year!!!

Instead of being at Collin, I’ll be working with our Dallas team and serving at an inner-city community college called Richland. I’d love to tell you all about it, so please reach out!

Last thing: for the next few months I’ll be focusing on fundraising my income for this next year so that I can afford to be on campus serving the students. If you would like to yourself, or know anyone who would be interested in supporting me as a campus missionary, let me know! That would really bless me, so thanks in advance!

Thanks again for keeping up with my ministry and for praying for me and everything I’m doing. I can’t express enough how much I appreciate the support. Thank you!

Popular posts from this blog 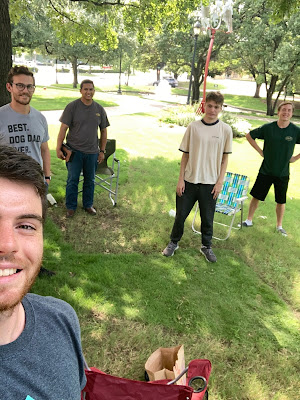 Hey everyone!  Thanks for taking the time to read my September blog!      I just want to say thank you so much for being on my support team and allowing me to do campus ministry this year. I've been reflecting on just how much of a blessing it is to be able to work hard at something that is important and life-changing. I thank God for all of you!     Here's what I've been up to...  Core:     This is (part) of the small group that I've been helping lead this year so far. We meet at a park in downtown Plano every week on Fridays at 1 pm. I really love these guys and I'm so glad that they've invested some of their time into this community. They come from very different backgrounds and have diverse personalities, which can make pastoring them more challenging, but honestly I think our diversity seriously enriches our experience as we try to push each other to be more like Jesus. (Pictured from left to right: me, Tony, Ben, Nathan, Logan.  Not pictured: Collin,
Read more 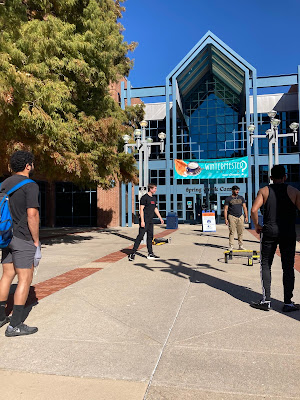 Hey Everyone! Thank you for reading my ministry blog this month and supporting me financially and with prayer to be able to do ministry. It's been such a blessing to see God working in the lives of students (and my own) so I'm incredibly thankful for your generosity and your sharing of the same Kingdom vision that I have!       Picture time!      These pictures are all from doing outreach on campus this month. We were having a hard time connecting and engaging with students so I started setting up games and inviting students to play at a consistent time each week. This has been really neat so far! Already in the last month I've been able to meet many people that I wouldn't otherwise have a chance to because they don't have any other reason to hang out on campus. This month alone more than a few students have joined a core and are being poured into spiritually on a regular basis because the Spirit was working through these outreach events. This is so exciting to m
Read more